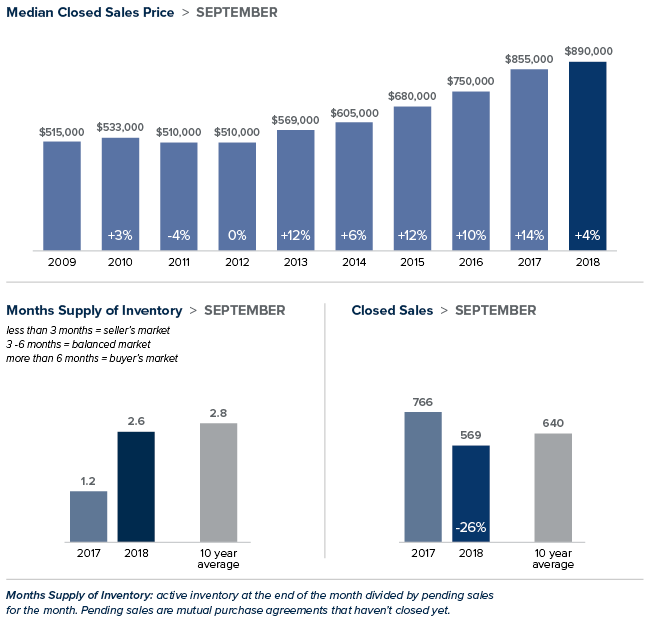 It appears that balance is slowly returning to the local housing market. Home price growth slowed in September. Inventory continued to climb, but is still far short of the four to six months that indicate a normal market. Homes are staying on the market longer, giving buyers the breathing room to make the right choice for their situation. With our region’s healthy job growth, and demand still exceeding supply, it’s likely to take some time to move to a fully balanced market.

Home price increases moderated into the single-digits in September. The median price of a single-family home on the Eastside was up 4 percent from the same time last year to $890,0000 but down from a median price of $935,000 in August. Inventory increased significantly and price drops jumped. While the market is softening, the recent expanded presence of Google and Facebook on the Eastside means demand should stay strong. In addition, the area’s excellent school system continues to be a large draw for buyers both locally and internationally.

While not nearly as dramatic as the case in King County, inventory in Snohomish County was up 40 percent. The area has just over two months of inventory with home prices moderating. The median price of a single-family home increased 8 percent over a year ago to $485,000. That’s down from the $492,000 median reached in August and $26,000 less than the peak of the market reached in spring.

Inventory was up 68 percent year-over-year in King County due to a higher number of sellers listing their homes and fewer sales. There is now more than two months of inventory in the county, a number we haven’t seen in nearly four years. Despite the increase, there is a long way to go to reach the four to six months of inventory that is considered balanced. In September, the median price of a single-family home was $668,000; an increase of 7 percent from the same time last year and virtually unchanged from August.

Inventory in Seattle surged in September from a year ago. Only San Jose, CA saw the number of homes for sale rise faster than Seattle last month. The median home price in September was $775,000. Up slightly from the $760,000 median price in August and a 7 percent increase from last year. The double-digit price growth of past years appear to be waning and overzealous sellers who listed their homes at unrealistically high prices have been forced to reduce them. Bidding wars have declined and the typical well-priced house is now selling right at asking price.