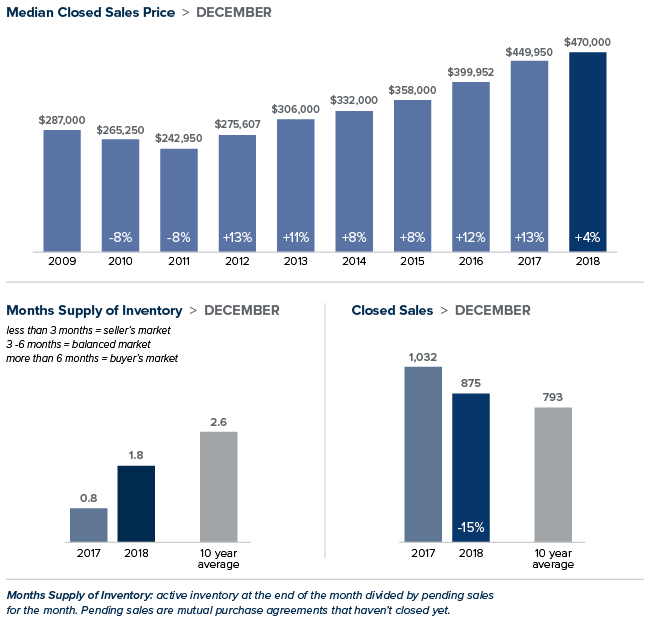 A cool-down in prices and a surge in inventory spelled out good news for buyers in December. Median home prices throughout the region continued to moderate. The number of homes for sale more than doubled over a year ago. Condo inventory more than quadrupled. While we’re still far short of the four to six months that are considered a balanced market, December moved us closer in that direction. As winter months traditionally bring slower sales and lower prices, we’ll be able to determine a more solid trend when the peak real estate season comes this spring. 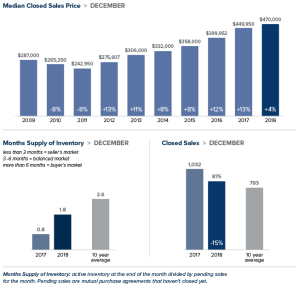 The median price of a single-family home was up 4 percent from last year to $470,000 in December – the same price the area posted the previous month. Inventory has more than doubled in the past year due to more sellers listing their homes and fewer sales. However, at 2.6 months of supply the area has a long way to go before becoming a balanced market. 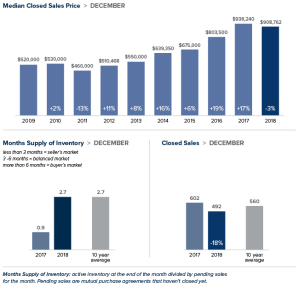 The number of single-family homes and condos on the market in December tripled as compared to a year ago on the Eastside. With an abundance of choices for buyers, homes here took longer to sell. However, well-priced homes still sold within weeks rather than days, which was the case earlier in the year. As with all of King County, home prices here continued to moderate. The median price of a single-family home was $909,000. That’s down 3 percent from a year ago, but up from November’s median price of $885,000.

In December, the median price of a single-family King County home was $639,000. That is 0.6 percent more than the same time last year and a welcome respite from the double-digit increases we saw for much of 2018. Inventory was up as well, soaring 143 percent from a year prior. The trend toward a more balanced market is good news for buyers. Instead of having to make a decision in a matter of hours, buyers now can take the time to consider their options and negotiate a price and terms that work best for them.

Last December there were only 299 homes on the market in Seattle. This December there were 1,111. Despite the sharp uptick, Seattle has the tightest inventory in King County with less than two months of supply. Demand is predicted to stay high in 2019. With an abundance of high-paying jobs and not enough people to fill them, Seattle’s population is expected to grow at twice the national rate this year. Prices have continued to moderate from the unsustainable increases of last year. The median price of a single-family home inched up 2 percent from the year prior to $739,000.